181. If at first you don’t succeed, skydiving is not for you!

182. An American football coach walked into the locker room before a game, looked over to his star player and said, “I’m not supposed to let you play since you failed math, but we need you in there. So what I have to do is ask you a math question, and if you get it right, you can play.” The player agreed, and the coach looked into his eyes intently and asks, “Okay, now concentrate… what is two plus two?” The player thought for a moment and then he answered, “4?” “Did you say 4?” the coach exclaimed, excited that he got it right. At that, all the other players on the team began screaming, “Come on coach, give him another chance!”

184. How many snowboarders does it take to screw in a lightbulb? 50: three to die trying, one to actually pull it off and the other 46 to say, “Man, I could do that!”

185. Today a man knocked on my door and asked for a small donation towards the local swimming pool. I gave him a glass of water.

186. What runs along the edge of the pitch but never moves? The side-line.

187. What did Mike Tyson say to his girlfriend? You’re EARresistable.

188. Arsenal are a team in transition. They’re going from bad to worse.

189. What do they call a boxer who gets upset at getting beaten up in a fight? A sore loser.

190. Why do basketball players love cookies? Because they can dunk them!

191. I thought it was a sure thing, I backed a horse last week at ten to one. It came in at quarter past three!

192. Who was the poet of basketball? Longfellow.

194. Why should a bowling alley be quiet? So you can hear a pin drop!

195. A man waited patiently for his wife to finish playing a round of golf on their 18th wedding anniversary. The two of them went out to dinner at a lovely restaurant. They discussed many happy memories they’d shared during the years. Then he said, “Want to go for another 18?” “No,” she replied, “I think it’s too dark now.”

196. Changing a lightbulb How many Liverpool fans does it take to change a lightbulb? None, they just sit in the dark talking about how good the old one was.

197. I’ve always wanted to be somebody, but I should have been more specific.

198. A couple of old boys are talking and one asks the other, “Are you going to watch the school football match this afternoon?” “No, it’s a waste of time,” came the reply. “I can tell you the score before the game starts.” “Can you? What is it then?” “Nil nil!”

201. Two hunters are walking through a forest looking for deer. When all of a sudden, a giant bear jumps out and scares them silly. They drop their guns and run like hell. One of the hunters stopped, opened up his backpack and laced up a pair of tennis shoes. His buddy looked at him and said, “What are you doing? Are you crazy? You can’t outrun the bear!” To this the hunter said, “I know, all I have to do is outrun you!”

202. I knew my wife was a keeper the first time I ever saw her. She was wearing massive gloves!

203. What’s the difference between a Celtic fan and a coconut? You can get a drink out of a coconut!

204. I met a couple of Aston Villa supporters at the pub the other night. “Do you often go to Villa Park?” I asked. “Yeah, of course!” they said. “We’ve found the perfect way. Ten minutes after kick-off we climb over a fence!” “That sounds great,” I replied. “Yeah, but last week we were caught and had to sit down and watch the rest of the game.”

205. Paul is so condescending about my tennis strokes. I can’t take any more of his backhanded compliments.
206. They say the best way to beat the rush at Villa Park is to stay and watch to the end of the game!

207. “When I was 40, my doctor advised me that a man in his 40s shouldn’t play tennis. I heeded his advice carefully and could hardly wait until I reached 50 to start again.”

209. What do you call an Englishman in the knockout stages of the World Cup? A referee.

210. What did the softball glove say to the ball? “Catch ya later!”

211. During the World Cup in Brazil, the England team visited an orphanage. “It was heart breaking to see their sad little faces with no hope,” said Fernando, age 6.

212. What is a boxer’s favourite part of a joke? The punch line!

213. It is just before Scotland v Brazil at the next World Cup Group game. Ronaldo goes into the Brazilian changing room to find all his teammates looking a bit glum. “What’s up?” he asks. “Well, we’re having trouble getting motivated for this game. We know it’s important but it’s only Scotland. They’re shite and we can’t be bothered.” Ronaldo looks at them and says, “Well, I reckon I can beat these by myself, you lads go down the pub.” So Ronaldo goes out to play Scotland by himself and the rest of the Brazilian team go off for a few caipirinhas. After a few drinks, they wonder how the game is going, so they get the landlord to put the tele on. A big cheer goes up as the screen reads ‘Brazil 1–Scotland 0 (Ronaldo 10 minutes)’. He is beating Scotland all by himself! Anyway, a few more drinks later and the game is forgotten until someone remembers ‘It must be full time now, let’s see how he got on’. They put the scores back on. “Result from the Stadium ‘Brazil 1 (Ronaldo 10 minutes)–Scotland 1 (Angus 89 minutes)’. They can’t believe it; he has single handedly got a draw against Scotland! They rush back to the Stadium to congratulate him. hey find him in the dressing room, still in his gear, sat with his head in his hands. He refuses to look at them. “I’ve let you down, I’ve let you down.” “Don’t be daft, you got a draw against Scotland, all by yourself. And they only scored at the very, very end!” “No, No, I have, I’ve let you down… I got sent off after 12 minutes.”

214. An Aston Villa fan walks into a pub with his dog just as the football scores come on the TV. The announcer says that Aston Villa has lost 3–0 and the dog immediately rolls over on its back, sticks its paws in the air and plays dead. “That’s amazing,” says the barman, “what does he do when they win? ”The Aston Villa Fan scratches his head for a couple of minutes and finally replies, “I dunno… I’ve only had the dog for eight months.”

215. Why was Cinderella kicked off the basketball team? She ran away from the ball.

216. A man comes into library and asks where he could find books about Everton in Champions League. “Fairy tales and fantasy are on the second floor, sir.”

218. Juventus just finished playing Man United in the Champions League, a little fan runs up to Ronaldo after the match waving a piece of paper to get an autograph. CR says, “Sure, do you have a pen?” The kid says, “I’ll get one.” Throws himself on the ground and starts rolling around, holding his knee and crying. Cristiano says, “You said you were getting a pen.” The kid replies, “Well, it works for you.”

219. What do you call and Englishman in the knockout stages of the World Cup? A referee.

221. What do you get if you cross a ball and Romelu Lukaku? A goal kick.

223. How many Manchester United soccer fans does it take to change a lightbulb? None – they’re quite happy living in the shadows.

224. A man loved to play golf. It was the one activity he looked forward to every week. One Saturday, he returned home from a scheduled foursome much earlier than his wife had expected. She asked him why he was home so early. “Do you want to play golf with someone who whines about every shot, complains about everything on the course, and makes noises when you’re trying to make an important shot?” he asked. “No, I don’t,” answered his wife. “Neither did they!”

225. Two surfers are getting ready to paddle out. Surfer one: “Hey, guess what! I got a new longboard for my wife!” Surfer two: “Great trade!”

228. “How was your golf game, dear?” asked Jack’s wife Tracy. “Well, I was hitting pretty well, but my eyesight’s gotten so bad, I couldn’t see where the ball went.” “You’re seventy-five years old, Jack!” admonished his wife. “Why don’t you take my brother Scott along?” “But he’s eighty-five and doesn’t even play golf anymore,” protested Jack. “Yes, but he’s got perfect eyesight and can watch your ball for you,” Tracy pointed out. The next day, Jack teed off with Scott looking on. Jack swung and the ball disappeared down the middle of the fairway. “Did you see where it went?” asked Jack. “Yup,” Scott answered. “Well, where is it?” yelled Jack, peering off into the distance. “I forgot.”

229. What goes all the way around the baseball field but never moves? The fence. 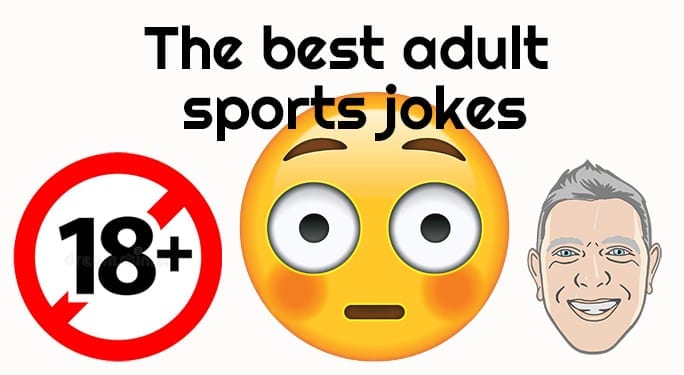